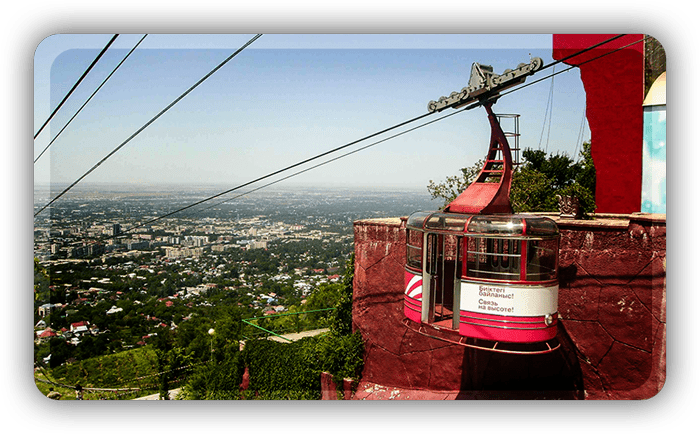 During this trip, you can learn more about Kazakhstan, a country that impresses with its cultural monuments. Here you can also see beautiful lakes and interesting canyons. But most of all, you will be amazed at how new technologies and historical monuments combine well. Enjoy the picturesque view of the beautiful nature.

Day 1: Almaty - Shymkent
Guide will meet and accompany you to Shymkent where you will have a city tour. The road from airport to Shymkent takes 4 hours. This city had a great location where the Great Silk Road passed. It is located with the most ancient cities of the Middle Ages - Otar, Turkestan, Syganak, Sauran and others. Nowadays Shymkent continues to be a historical and cultural center in the south of Kazakhstan. Here you will be able to see a lot of the memorable places as the Alley of memory in the park named after Kaldayakov, the monument "Jer An", Ordabasy Square "20 Years of Independence of the Republic of Kazakhstan Park", Museum of Victims of Political Repressions, Obelisk of Glory, Walk of Fame, Eternal Flame for the Fallen in World War II, Arboretum as well as local museum. Night is in the hotel.

Day 2: Shymkent - Turkestan - Shymkent
In course of the tour you will visit Turkestan. This city was built in 500 AD in the crossroad of caravans from Samarkand, Bukhara and Khiva to northern Kazakhstan. Moreover this city used to be the capital of the Kazakh Khanate. This city had great fame in the worlds due to Sufi sheikh and philosopher Khoja Ahmed Yasawi. This mausoleum was built by the order of Emir Temirlan even through Sufi sheik died earlier. In modern days this building is considerate to be an exceptional masterwork of medieval architecture and one of the main places of worship for Muslims. There are legends tell about many attempts to build mausoleum but failed. Last one was about Tamerlan and his dream.  In a dream saint appeared and said to build a mausoleum over the grave of Arystan Bab, and only then - over the tomb of Khoja Ahmed Yasawi, and Tamerlan did it. Due to this it became the popular place among pilgrims. Pilgrims say that three trips to Turkestan equal small Hajj to Mecca. In Turkestan you will visit "Azret-Sultan" historical and architectural complex, Mausoleum of Khoja Ahmed Yasawi, Turkestan ancient settlement, Necropolis, a fragment of the fortress wall, Citadel with gates, Hammam, Hilvet underground mosque. Night is in the hotel

Day 3: Shymkent - Almaty
Today you will be transferred to Almaty where you will explore the all major sights of the city.  At the central part of it you will hear about history and development of the Southern capital of Kazakhstan. Green Bazaar is the first sight that you will see. Here you will be able to find any goods and to learn the art of bargain. After it you will see the one of the oldest park of the city the Panfilov park and Zenkov Cathedral that is considered to be one of the most magnificent wooden buildings. Then you will witness the Memorial of Glory and Eternal Flame that was built in honor of the fighters who died for freedom and independence of the country. Next destination for exploration is Medeo gorge that is famous to the highest mountain skating rink in the world and the dam, protecting the city from dangerous mudflows. After it Kok Tobe hill where the tallest TV tower in the world is situated. In Kok-Tobe Park you can enjoy the view and look foe souvenirs. You will drive to city by using famous Almaty cableway. Night is in the hotel.

Day 4: Almaty - Issyk Lake - Almaty
Today you will visit one of the gorges of Trans-Ili Alatau - Issyk Gorge. It lays along the Kuldja tract, where many years ago the endless trade caravans passed. During the tour you will get more information about nature and history of this area. Moreover it will be possible to see the burial mounds of Sakas period. There was found famous "Golden Man", which became a state symbol of the Republic of Kazakhstan. In addition you will visit the State Historical and Cultural Museum-Reserve "ISSYK", all expositions dedicated to the history and culture of the Sakas period, including a copy of Golden Man and golden items, ancient ceramics, weapon, elements of horse equipment, as well as the model of Sakas burial mound. Next destination is the Issyk lkae After exploration of the most iconic exhibit we continue our drive to the alpine lake Issyk Lake that is situated on the altitude of 1 756 meters above sea level. This lake was formed due to the huge landslide 10 000 years ago furthermore the dam of 300 meters in height appeared. Here it will be able to spend time enjoying the beauty of this lake while listen to the details of the natural disaster of 1963. Driving back to the city. Night is in the hotel.

Day 5: Flight
Transfer to the airport