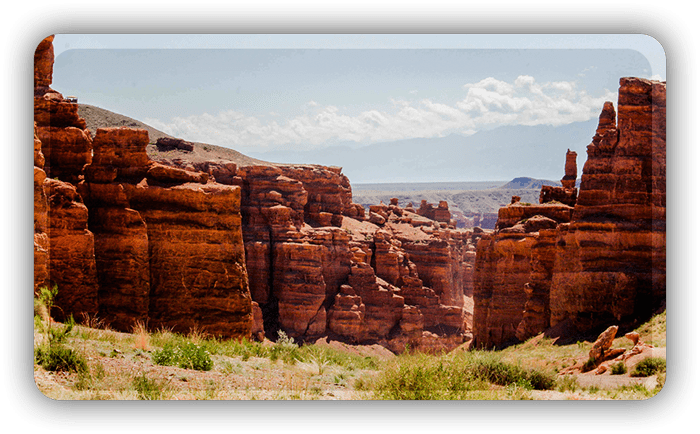 During the whole tour you can enjoy beautiful views of the country as well as interesting historical monuments. We can see almost all the most interesting and important monuments of Kazakhstan. We will make your tour unforgettable and at the highest level. Due to it you wll enjoy the time that you will spend here.

Day 1: Almaty - Shymkent
The driver will meet and accompany to the Shymkent city. The road to the city will take for 4 hours. This city lays in the crossroad of the Great Silk Road. You will learn more about ancient cities of the Middle Ages as Otar, Turkestan, Syganak, Sauran and others.  Here you will be able to enjoy the beauty of the modern city as well as wide business streets. During the tour you will be able o enjoy Memory Alley in Park named after Sh. Kaldayakov, Monument "Jer An", Ordabasy Square, Park "20th Anniversary of Independence of the Republic of Kazakhstan", Museum of political repression victims, Obelisk of Glory, Walk of Fame, Eternal Fire to the fallen in the Second World War, Arboretum as well as the regional historical museum of local lore. The night is in the hotel.

Day 2: Shymkent - Turkestan - Shymkent
Your destination for today is travel to Turkestan. This city appeared 500 AD at the crossroads of caravan routes from Samarkand, Bukhara and Khiva to northern Kazakhstan.  This city was famous due to being the spiritual and political center of the Turkic-speaking people in the XVI-XVIII centuries as well as being the capital of the Kazakh Khanate. Due to the Sufi sheikh and philosopher Khoja Ahmed Yasawi, Turkestan became world known city. This interesting person is buried in a small mausoleum here. Even though he died in 1166 only 233 years after his death the mausoleum was built by the order of Emir Tamerlane. Now it is the masterpiece of medieval architecture as well as sacred place for Muslims. According to legendthis building was built many times and only was it was successful erected. As the legend says Tamerlan dreamed about saint that came to him and said to build a mausoleum over the grave of Arystan Bab  who was teacher and spiritual mentor of Khoja Ahmed Yasawi, and then over the tomb of Khoja Ahmed Yasawi. During the time you can witness a lot of pilgrims visit the mausoleum of Arystan Bab, and then Mausoleum of Khoja Ahmed Yasawi  onsidered to be as a small Hajj to Mecca. Moreover it will be possible to visit "Azret-Sultan" historical and architectural complex, Mausoleum of Khoja Ahmed Yasawi, Turkestan ancient settlement, Necropolis, Hammam, Hilvet underground mosque. Tours to this sight is very popular. Afterwards is transfer to the hotel.

Day 3: Shymkent - Almaty
Toady you next destination according to travel schedule is Almaty. You will reach by having flight. Upon arrival in the center part of the city you will learn more about the Southern capital of Kazakhstan.  In course of the tour you will explore the Green Bazaar that is famous even among locals. Here you will be able to find various goods and sweets. After it goes the oldest park of the city - Panfilov park and the wooden Zenkov Cathedral. Memorial of Glory and Eternal Flame which is dedicated to the memory of the fighters who died for freedom and independence of the country is the sight that you will visit. After it you will have a drive to Medeo Gorge where the highest mountain skating rink is situated. Ten you will have a good time while visiting the famous Kok-Tobe hill with its the tallest TV tower in the world. Kok-Tobe Park is allows to you to witness the view of the city as well as shopping. Returning to the city is on the short ride from the top of the hill to the center of the city by the famous Almaty cableway. Overnight is in the hotel.

Day 4: Almaty - Issyk
In course of the travel you will be able to travel to the most beautiful gorges of Trans-Ili Alatau - Issyk Gorge. It is situated along the Kuldja tract. During the drive you will know more about the history and as well as the burial mounds of Saka period, where the famous "Golden Man" was found. That became the state symbol of the Republic of Kazakhstan. On the way you will have excursion at the State Historical and Cultural Museum-Reserve "ISSYK". You will find there a copy of Golden Man and golden items, ancient ceramics, weapon, elements of horse equipment, as well as the model of Saka burial mound. The Issyk gorge is situated on the altitude 1756 meters above sea level and the beautiful mountain lake Issyk. This lake appeared about 10,000 years ago due to the landslide of 300 meters in height. Here you wil be able to enjoy the touts and will take a lot of photos. In addition you will be told about the natural disaster happened in 1963. Night is in hotel.

Day 5: Almaty - Charyn - Almaty
Toady your destination is Charyn Canyon. You will be provided by the listed supplies. Moreover you will be able to take your own snacks to the tour. The road to canyon takes 4 hour and during this tour you will learn more about the history, and nature of the region, Kazakh people, style of life as well as traditions. During the tour you can have a break to visit local museum of traditional decorative and applied arts and crafts. Upon arrival to canyon the impressive you will astonish you.  At the bottom of the canyon you will enjoy the famous Castles Valley. We are sure you will like it. You will enjoy the cool air with mix of the cold Charyn River. You will find eco-park with several yurts (traditional dwellings) and a small open air café which works only in summer. Your tour will be breathtaking and unforgettable. Returning back to the city. Overnight is in the hotel.

Day 6: Flight
Transfer to the airport