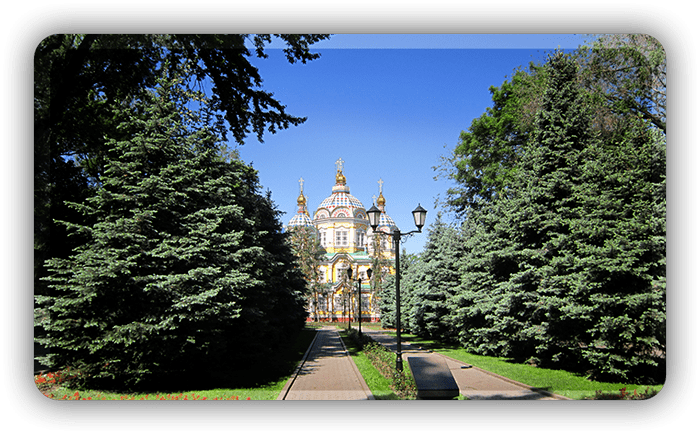 This tour is very interesting for those who love nature and want to see something beautiful. Two countries along which the Great Silk Road once passed were very interesting for its rich nature and history. Here you can see the culture of two fraternal peoples. Moreover you will see the beauty of mighty mountains that will slay you by its size.

Day 1: Almaty
You will be met and transferred to have a tour for with sightseeing in central part of Almaty. Here you will learn more about history and development of Almaty and see its major attractions. In course of the tour you will visit place that is popular even among local people. The Green Bazaar is place where you won't hold yourself shopping. Here you will be able to immerse in the atmosphere of the real eastern bazaar. Next destination of the city tour is the Panfilov park one of the oldest here. Moreover you will be able to witness the one of the most splendid wooden buildings in the world - Zenkov Cathedral. After it you will have a chance to visit the Memorial of Glory and Eternal Flame that was made in the memory of the fighters who died for freedom and independence of the country. Medeo Gorge is the next tour point that is noted due to the highest mountain skating rink in the world. Also it is a dam that protects the city from dangerous mudflows. Than is Kok-Tobe hill that is famous due to the location of the tallest TV tower in the world. To return to the city you will need to ride the famous Almaty cableway. Night is in the hotel.

Day 2: Almaty - Issyk - Almaty
In course of the tour you will be transferred to the picturesque gorge of Trans-Ili Alatau - Issyk Gorge that lies along the Kuldja tract. Many years ago at this place caravans full of goods passed here. During tours you will be able to know more about history and nature of this region as well as see the burial mounds of Sakas period, where the famous "Golden Man". This great sight is the state symbol of the Republic of Kazakhstan. On the way you will have a break at the State Historical and Cultural Museum-Reserve "ISSYK", here you will have an excursion of the history and culture of the Sakas period, including a copy of Golden Man and golden items, ancient ceramics, weapon, elements of horse equipment, as well as the model of Sakas burial mound. After it your travel will go to the altitude of 1756 meters above sea level. At this place you will have chance to enjoy the incredible beauty of the alpine lake Issyk. The lake appeared due to the colossal landslide, which formed natural dam of 300 meters in height. You will be impressed by the view of this lake. In addition you will find out the details of the natural disaster of 1963. Transfer to the city. Overnight is in the hotel.

Day 3: Almaty - Bishkek
Driver will transfer you to Bishkek; it is the capital of Kyrgyzstan. Before you will that the travel you will learn some information about capital city. Bishkek is situated at about 800 meters) altitude near the northern range of the Kyrgyz Ala Too range. This range is part of Tian Shan mountains, which rises up to 4,855 meters moreover you will be impressed by the view of this mountains. During the tours in Bishkek we choose the most prominent sights such as Pobeda Square (Victory Square), Duboviy Park (Oak Park), Central Ala-Too Square, the National Arts Museum, National Philharmonic, and many others places of interest. Night is in a hotel.

Day 4: Bishkek - Burana - Issyk Kul northern shore
In the morning you will be transferred to Issyk Kul Lake that is known as the second largest mountainous lake in the world with the altitude of 1608 m. above sea level. This lake has another name "the pearl of Central Asia". This lake never freezes and in addition has curative qualities thanks to the salty water. On the way to the lake you will have a stop to explore Burana Tower of 111th century and an open air museum of Balbals (stone warriors). F you wish to see the view that travelers saw at the past that you can climb to the top of it. Burana Tower used to be sign along the Great Silk Road to let travelers know there was a city and place to have a rest. The night is in a hotel.

Day 5: Issyk Kul lake - Karakol
In the morning you will drive to Karakol town here you will have a tour.  In course of the tour you will have a stop to witness the ancient stone inscriptions dating back to 800 B.C. they were made more than 2 000 years ago by shamans. After it we will continue our tour to the town of Karakol.  Upon arrival you will explore the most prominent sights of the city such as Dungan mosque that was built without using single nail and the old wooden Orthodox Church. The night is spent in a guesthouse.

Day 6: Karakol - Jeti Oguz - Issyk Kul southern shore - Bishkek
Today the destination of the tour is the Jeti Oguz gorge. Jeti Oguz or Seven Bulls is the famous sight that attracts tourists with its interesting shape and of red rock. In addition you will have an opportunity to see there the Broken Heart Mountain that can open breathtaking view of the gorge of on the top. To reach the top of the mountain you need to hike 20 minutes. After it we continue our drive to Bishkek. On the way to it you will have a break at Bokonbaeva village that is interesting for the tourists due to the local eagle-hunter. With the help of the eagle he hunts hares and foxes. It is traditional nomadic way of hunting that passed through generation. You will find out a lot of interesting facts about it. After this visit we will continue our way to Bishkek. Night is in a hotel.

Day 7: Bishkek - Ala Archa - Bishkek
Toady your destination of the tour is Ala Archa gorge. This Natioanl Park is famous even to lopcal people due to the fact that at Soviet Union this place as open only for those who had permission in other words only V.I.P. could enter. The Ala Archa gorge is on a spur of the Tien Shan mountain range. The gorge is situated for 45 km from Bishkek. You can have a short hiking tour to see a panoramic view of the gorge. Afterwards we return to Bishkek. Night is in a hotel.

Day 8: Flight
In the morning is transfer to airport.