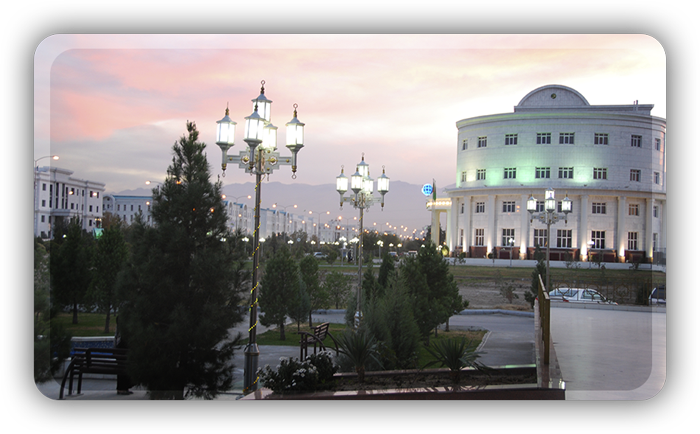 Incredible beauty will fascinate you on this journey, you can see the secret beauty of the nature of the country. Places filled with deep history in a tidy with breathtaking views await you. Enjoy the great vacation here.

Day 1: Ashgabat
Upon arrival you will start your Turkmenistan diamond 4. Guide ill meet and accompany you to the UNESCO World Heritage, the famous Old Nisa. The road will go 18 km to the west from Ashgabat. There you will see the history of great city that is considered to be remains of the capital of ancient Parthia. Due to some circumstance the Old Nisa became a residence while New Nisa became the capital of Parthia in the III century BC.  Later on you will be transferred to the one of the most beautiful buildings of ancient world, the *Ertugrul Gazi mosque. Here you will see four snow-white minarets the design is resemble the Blue Mosque that can be found in Istanbul. The exterior and interior design of the Azadi Mosque is made in old-time Islamic and Byzantine style that will mesmerize you by its grander design. After it you will drive to the *Gypjak, Ruhy mosque. The meaning of this word is "the mosque of Turkmenbashi spirituality" or "the mosque of spirit of Turkmenbashi". You will see it in the Turkmenbashi native village in Gypjak. There you will be able to observe the one-domed building that lays among 4 minarets. You will be impressed to known that the height of this place is 55 m, and that of the minarets is 91 m to symbolize the year 1991 - when Turkmenistan gained independence. The building is accessible through 9 entries with arches. Night is in a hotel.

Day 2: Ashgabat - Turkmenabad
In course of the tour you will travel to the one of the most interesting place of Turkmenistan the medieval mosque Seyit Jemaletdin. This wonderful building was built in the XV century but the building was almost completely destroyed by Ashgabat earthquake due to it you will see the restored version. There you will see the inscription which tells that building was built under Abul-Kasim Babur. His time of reign Temurid prince in Khorasan is 1447- 1457. You will be impressed by the decoration with figures of fabulous dragons on the arch. After it you will explore Abiverd, the ancient settlement of Turkmenistan like Kunya-Urgench, Nissa, Merv, Dakhistan etc. This fortress protected townspeople from the attacks of nomads that had only one   gate from the southwest. Inside of it you will mosque appeared in the early 15th century. Later on you will explore the famous Merv one of the most influential and oldest city in Central Asia. It led to the formation of one of the largest cities of ancient world - Merv (Margush, Margiana, Mary). You will notice that epithets that describe this city like "a soul of a king, a mother of Khurasan cities, and, the city that helds the Universe. Omar Khayyam, As - Samani, Imamaddin-Isphakhani and other great thinkers of the Middle Ages lived there. After it you will be transferred to Turkmenabad. Night is in a hotel.

Day 3: Turkmenabad - Astana-baba - Kerki village - Turkmenabad
Today you will have a tour in Repetek biospheric reserve with its museum and Astana mausoleum. Here you will be able to see the memorial complex consisting of a mosque and a tomb. All the prominent sights were built in different periods but located near each other. Due to it you will have some hardship to imagine the original shape of the structure. Then you will see the Astana-baba of 11th - 12th-century monument of architecture that is known as "zyuarat". People come here for worshipping of holy men observed by visiting pilgrims. No one knows for sure who Astana-baba was even trough the building is known to be sacred and healing. Thousands of sick people gather there annually to receive long-awaited healing. Overnight is in the hotel.

Day 4: Turkmenabad - Ashgabat - Darwaza
In course of the tour you have a morning flight to Ashgabat. Upon arrival you will drive to the famous Darwaza. Tours to this place are known for tourists that will mesmerize you for "The Gates of Hell". You will see the fabulous gas crater that appeared in 1971. Here you known that this sights was made at Soviet Union due to the drilling rig that accidentally broke into a massive underground natural gas cavern, causing the ground to collapse and the entire drilling rig to fall in. People like to see this scary name and the flame that burn even today. The country's government hopes it'll become a tourist site, and the nearby desert has already become a popular place to wild camp. Night is in the tent.

Day 5: Darwaza - Ashgabat
Today you will travel to Ashgabat on the way to it you will see the water and mud crater, and Yerbent village. In the evening you will have a city tour in Ashgabat.

Day 6: Flight
In the morning is transfer to the airport.