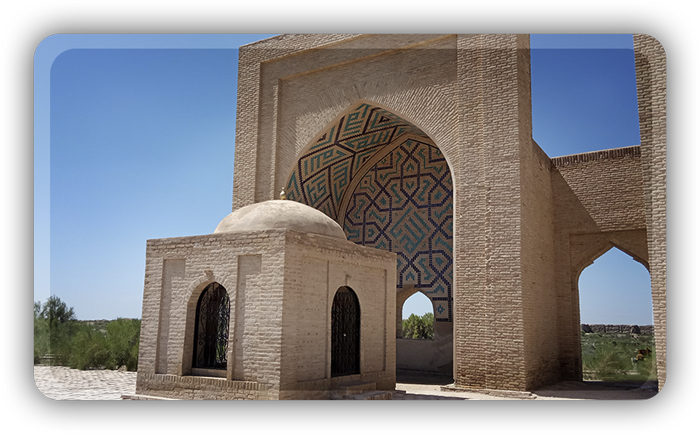 You are waiting for the incredible beauty of the ancient building that saw incredible historical events. In addition, you can also fully enjoy the picturesque nature on this tour. Enjoy your vacation fully in comfort.

Day 1: Ashgabat
Welcome to Turkmenistan diamond 5! Upon arrival to airport you will be met and transferred Ashgabat city. In course of the tour you will see the most prominent sites of Turkmenistan. First site to see will be the famous "Old Nisa". This attraction was added to UNESCO World Heritage since 2007that is located 18 km to the west from Ashgabat. Moreover it was the capital of ancient Parthia. During the tour you will know that the New Nisa became capital in the III century BC while Old Nisa started to be a residence. After it you will see other wonderful site that is known due to the beautiful design, the *Ertugrul Gazi mosque. Here you will be able to witness four snow-white minarets that have similarities with the well-known Blue Mosque, located in Istanbul. On this tour you will be able to explore this site to witness the exterior and interior design of the Azadi Mosque that was built in old-time Islamic and Byzantine style and strikes with its greatness and refinement. Later on you will visit the *Gypjak, Ruhy mosque the name of which can be translated as "the mosque of Turkmenbashi spirituality" or "the mosque of spirit of Turkmenbashi". You will visit it in the Turkmenbashi native village where you will be able to witness a one-domed building, surrounded by 4 minarets. The height of the mosque is 55 m, and that of the minarets is 91 m to symbolize the year 1991 - when Turkmenistan gained independence. You can enter to this building using one of 9 entries with arches. Night is in the hotel.

Day 2: Ashgabat - Turkmenabad
In course of the tour you will travel to the medieval mosque Seyit Jemaletdin that was made in the XV century. While observing it you will know that this building was practically destroyed by powerful earthquake that why you are going to see the restored version of it. You will see the inscription on the building that tells the Abul-Kasim Babur whom this site was built. He was Temurid prince who was ruled in Khorasan in 1447- 1457. The main portal will impress you by the dragons that decorate it. Later on you will head on to the Abiverd that is known to be one of the ancient settlements of Turkmenistan as Kunya-Urgench, Nissa, Merv, Dakhistan etc. You will amazed by the fact that this fortress was strongly walled and protect the townspeople from the attacks of nomads. Moreover this interesting site had only one entrance that is located in the southwest. Inside of it you will find the mosque of the early 15th century. After it you will be transferred to  Turkmenabad. Night is in a hotel.

Day 3: Turkmenabad - Astana-baba - Kerki village - Turkmenabad
Today your destination is the Repetek biospheric reserve with its museum and Astana mausoleum. You will be impressed by the fact that the mausoleum is a part of the memorial complex that is made of mosque and a tomb. Moreover all these buildings were built different epoch very close to each other and it is very difficult to say what style was used. You will learn that this mausoleum was built in 11th - 12th-century. It is also known as the "zyuarat" or a place for a regular ritual of worshipping as well as holy men observed by visiting pilgrims. People don't know who Astana-baba was even so people all round the world considered this place sacred and healing. Thousands of sick people gather there annually to receive long-awaited healing. Night is in the hotel.

Day 4: Turkmenabad - Mary - Merv
Today you will travel to the place tours to which are very popular due to great history and many prominent items of ancient times. The road will go to Merv that is non as one of the most ancient territories of Central Asia that started to use the irrigation system among the first. Due to it this city became one of the largest cities of ancient world that is known as Merv (Margush, Margiana, Mary). It is not really know how this city appeared but the first written references to this city were found in Avestian chronicles of the 8-6th centuries B.C that is describes this city like "a soul of a king, a mother of Khurasan cities, and, the city that helds the Universe. Omar Khayyam, As - Samani, Imamaddin-Isphakhani and other great thinkers of the Middle Ages lived there. We will also visit Soltan Sanjar mausoleum, Erk gala, Gawur gala, Soltan gala, Kichi vs Uly gyz gala etc. Night is in a hotel.

Day 5: Mary - Ashgabat - Darwaza
In course of the tour you will have a morning drive to the famous sight of Turkmenistan that is known as the Darwaza. You will be amazed by the famous among the world Door to Hell how the locals call it. This mysterious flaming crater can completely mesmerize you with its looks and heat that was created in 1971. This incredible sight appeared in Soviet Union time when Soviet drilling rig accidentally broke a massive underground natural gas cavern, causing the ground to collapse and the entire drilling rig to fall in. Due to it the poisonous gas began leaking at an alarming rate. This place has scary name even so many people come here you see this wonderful sight of its blazing glory. The country's government hopes it'll become a tourist site, and the nearby desert has already become a popular place to wild camp. Night is in the tent.

Day 6: Darwaza - Ashgabat
Today you will head on to the capital of Turkmenistan. On the way to it you will enjoy the picturesque view of water and mud crater, and Yerbent village. In the evening you will have a city tour in Ashgabat.

Day 7: Flight
In the morning is transfer to the airport.