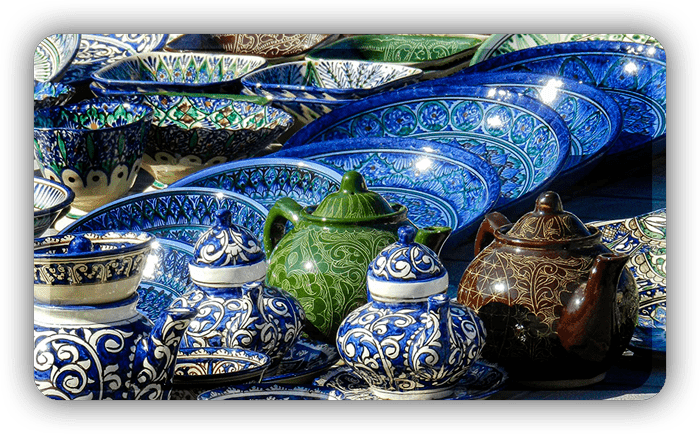 You will be impressed with what you see during the tour. The incredible shearing of ancient years that have survived to this day will show the beauty of the work of ancient masters

Day 1: Tashkent
We will be glad to meet you in Uzbekistan diamond 5. You will be met at the airport and transferred to capital city of Uzbekistan. In course of the tour you will explore the major sights of the city like Independence square. This attraction was erected as a symbol of victory over fascism in World War II. After it you will walk on the street that is known as the local Broadway. This street connects the Independence square and Amir Timur square. Then you will explore the famous for its beauty Tashkent metro, which first line was opened in 1977. Then you will head on o the old part of the city to explore the sights like Chorsu Bazaar, Kukaldash Madrasah and Hast Imam complex that consists of several madrasahs, mosques and mausoleum. Don'[t miss the ooppotunity to witness the one f the most interestinf attractions of the tours in Uzbekistan the world's oldest Quran copy dating back to 8th c. Quran belonged to Othman Ibn Affan, the Third Caliph who was killed by non-muslims in 8th century. The blood is sitil visiable on its pages. Night is in a hotel.

Day 2: Tashkent - Termez (morning flight)
In course of the your you will have a morning flight to Termez. During the route you will learn that it one of the most ancient cities in Central Asia. Here you will be able to witness the remains of the great history of this once prosperous city. Here you will be able to witness the great historical heritage that was destroyed by Genghis-Khan in 1220. Then the new city appeared in the east of the old town. In course of the travel you will have to explore the Archeological museum, Fayaztepa, Mausoleum of Hakim at Termezi, Buddhist Stupa Zurmala, Mausoleum Sultan Saodat, Honako Kokaldor Ota, Nunnery Kirk Kiz, Jarkurgan's Minaret, Dalverzintepa archeological dig (some sights might be closed due to military trainings). At the end of excursion is transfer to hotel. Overnight is in a hotel.

Day 3: Termez - Shahrisabs - Samarkand (390 km, 7 hours)
In the morning you will have a tour to the place where the famous Amir Timur was born. The town is known as Shahrisabs. Here you will enjoy the view of the one of the most interesting sights of the city that will captivate you by its grander Ak Saray Palace, built by Amir Timur. Here on the main gate you will see the inscription that tells: "If you want to know about our power, look at our buildings". After it you will see Jahongir mausoleum that was built in memory of the oldest son of Amir Timur who lost his life in the battlefield. Amir Timur had a great sorrow due to it as the legend say it lasted for 30 years. The final sites to see in Shahrisabs are the Dorus Siadat and Dorus Tillavat memorial complexes where all descendants and relatives of Amir Timur were buried. After excursion you will drive to Samarkand. Night is in a hotel.

Day 4: Samarkand
Today you will explore the city that is known to be one of the most ancient with a similar age to cities of Babylon or Rome. Samarkand is situated in the valley of the river Zerafshan. Moreover it is interesting to know Samarkand city is the second largest in Uzbekistan. In course of the tour you will explore the most outstanding sights such as Registan square, Shakhi-Zindeh, Mausoleum Guri Emir and Bibi Khanum Mosque. You will visit the famous Registan Square that is made of a complex of three fascinating Madrasahs of 15-17th centuries. This site is famous among tourists that why tours here are one of the most visited. Then is the Shakhi-Zindeh that is known as the big collection of mausoleums of 11th-15 centuries that is also the part of a UNESCO World Heritage Site. Bibi Khanum Mosque was built in honor of favorite Tamerlane's wife, after his successful campaign in India. Overnight is at the hotel.

Day 5: Samarkand - Tashkent (train)
In course of the tour you will see the other sights of the city that is no less prominent. You will explore the Ulughbek observatory of 15th century by Ulughbek. He is known in the history as one of the most famous Samarkand rulers and scientists. With the help off this site he wrote the "Zidji Guragoni" catalog in 1437. This book possesses information about 1018 celestial bodies. He died by the order of his son. Then you can stroll along the local Broadway where you can enjoy the souvenir shops, teahouses, sweets and workshops. Don't miss the opportunity to visit the national bazaar Siab, that is famous for the Uzbek traditional handmade products and local sweets. Afternoon transfer to Tashkent is by train. Night is in a hotel.

Service does not include:
- Visa
- Full board
- Travel insurance
- English speaking guide
- Entrances to all museums
- Flight Tashkent - Termez from 80 $